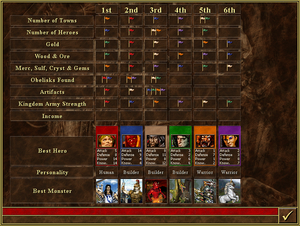 Thieves' Guild is in-build part of the tavern. It provides information on the relative strength of all the players and heroes. Each player is portrayed by a flag of their color which is placed further to the left depending on their rank regarding listed information. The information available in Thieves' Guilds are dependent on the number of towns a player controls.

Heroes stationed inside towns, are not included in the best hero category. However, this is not true in the strongest monster category.

The number of taverns you own modifies what you can see when right-clicking an opponent's town on the adventure map. If you have no taverns, an opponent's town will appear to have no garrisoned creatures. With one tavern, the creature stacks are shown but not their numbers. With two taverns, the creature stacks and their approximate numbers are shown.