Only available when the unofficial expansion, Horn of the Abyss, is installed.

A yet unreleased faction, which is planned to be released for Horn of the Abyss in 2020 (and confirmed to come with the 1.7.0 version). It will feature steampunk technology, with its seventh tier unit being a giant humanoid robot, the Dreadnought, and its upgrade, the Juggernaut.

It will also feature heroes from former games, such as Kastore and Agar, but also new ones, like Todd and Bertram.

The two classes have been revealed to be the might class of Mercenary and the magic class of Artificer. 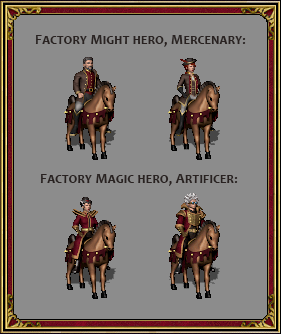